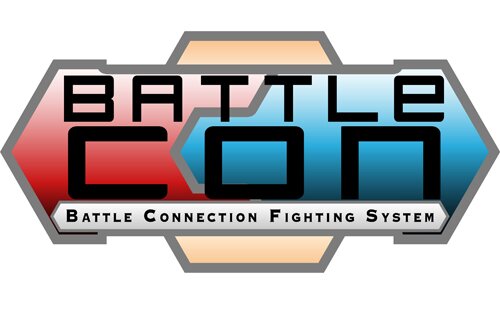 Yet another very promising game discovered on Kickstarter.com! Here are my impressions after teaching my fiance the rules and playing 2 back to back games.

*using only the free PnP version supplied by Level 99 Games.

BattleCON is a dueling style card game with each player representing a different character by using a pre-made deck. The deck is made up of 5 style cards and 1 unique base card that define that character’s fighting style. In addition to the unique cards, both players use a identical set of 6 base cards representing the abilities that all fighters posses. Each player also has a pawn placed onto a linear track representing the distance between each fighter. Every turn the players will combine one base card with one style card, creating their attack for the turn. All the cards have only 3 attributes: Range, Power and Priority. So when a base card is combined with a style, the attributes are calculated based on the values of both cards (i.e. Base range: 1, Style range: 1 = Total range: 2).

Range indicates how close the opponent has to be to your pawn in order for the attack to be successful.

Power is the amount of damage you do to the opponent, assuming you are in range and they cannot guard against or soak any of that damage.

Priority is used to determine who gets to make their attack first, potentially preventing the other player from attack this turn at all. If the active player (winner of the priority) hits their opponent for any damage, that player is stunned and cannot be activated that turn.

After both players simultaneously reveal their pair, priority is calculated to determine who goes first. In the case of a tie, a clash occurs. Each player must then take another base card from their had and replace the one just played. As you might have figured, this can muck the player’s strategy quite a bit. After one player has a higher priority, they proceed with their turn. On most of the cards there is special text allow the player to do certain actions during certain phases of their turn. Some allow the player to move their pawn 1 or 2 spaces when revealing the pair or before attacking, other cards might allow the player to move the opponent’s pawn. So anticipation as to what the other player might do is a major part of the strategy. Going full force offensive might not be a sound strategy all of the time. For instance, putting down a purely defensive card, knowing that you will lose priority, even though you probably won’t be able to attack for much damage, might be what saves you from taking a major hit.

Another aspect of the game that makes anticipating the opponent’s move even more important is the way cards come out of and back into each player’s hand. After playing a pair, those 2 cards go into discard pile 1. Discard pile 1 then goes to a second discard pile. The cards in discard pile 2 then go back into the player’s had. So each pair has a 2 turn cool down period before being able to be used again. This is important to keep track of because since each player has the same base cards, they know which cards the opponent has left in their hand, adding another clue to figuring out which pair they will play next turn.

End of our first game

So far I’ve played 2 back to back games with the free Print-and-Play version Level 99 Games has provided. They have released 4 of the 12 characters as a free preview, so people could get a sense of how the game plays.

Our experience was very enjoyable, after about halfway through the first game. The first part of the game we were stilling figuring out all the vocabulary, but it became pretty easy after that. We also started to see how important having priority was and that you can’t play your two best combination pairs back to back because it can really leave you open to taking big damage. We were able to finish the second game in about half the time of the first one, falling more into the line of the intended playtime.

End of our second game

Look for more information from me on BattleCON, as I get a few more plays under my belt. You might even see a video review some time soon…

If this sounds like a game you would be interested in, check them out on BoardGameGeek and Kickstarter.com to reserve your copy today!